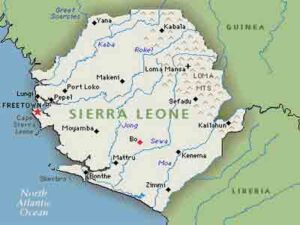 Share of main sectors of activity in GDP (World Bank 2016):

The political scene in Sierra Leone is dominated by two major parties, the All People’s Congress (APC) and the Sierra Leone People’s Party (SLPP), which have alternately held power since the end of the civil war (2002).

At the end of the second term of President Ernest Bai Koroma (APC), the Sierra leoneans brought the opposition candidate, Julius Maada Bio, to the highest office. In the second round of the presidential election held on March 31, 2018, he won 51.8% of the vote against power candidate Samura Kamara (APC, 48.2%). ).

A retired Brigadier General and an unfortunate presidential candidate in 2012, Julius Maada Bio was briefly in power from January to March 1996 in a coup d’état against Captain Valentine Strasser. was the vice president.

It will have to deal with an Assembly where the PCA is majority (63 seats against 48 for the SLPP).

He has made education the spearhead of his program, with a commitment to free tuition for all from primary to university (education now represents 21% of the national budget and primary school is free since September 2018 ).

Sierra Leone has strong agricultural potential. Agriculture remains the main livelihood of the inhabitants. This sector accounts for 59% of GDP and 2/3 of the country’s jobs. Agricultural production is concentrated on a few commodities: rice, cocoa or coffee. Fishing is of limited value despite abundant fish resources.

The economy has been severely impacted by the effects of the Ebola epidemic which, from 2014 to 2016, caused nearly 4,000 deaths in the country. After a drastic drop in GDP in 2015 (-21%), Sierra Leone has regained growth and prospects for economic recovery (+ 7% in 2021) are good thanks to the implementation of the post-Ebola Recovery Strategy and the resumption of iron extraction.

Sierra Leone benefited from a three-year Extended Credit Facility (ECF) program adopted in 2013 and completed in 2016. In June 2017, at the request of the Sierra Leonean authorities, the IMF provided a new three-year economic program under the of approximately $ 54.3 million. The program aims to gradually increase government revenue by mobilizing domestic resources more, reducing poverty and supporting the medium-term structural reform agenda.

Sierra Leone is a member of the Commonwealth. In May 2000, hundreds of UN peacekeepers were taken hostage by the Revolutionary United Front (RUF) and several hundred Special Forces were dispatched to Sierra Leone. After this military intervention, the United Kingdom remained engaged with Sierra Leonean regular troops. A bilateral agreement ensured until 2010 the professionalization of the Sierra Leonean armed forces. The United Kingdom, which is the country’s largest bilateral partner, is now focusing its support on the civilian side, with a particular focus on youth, education and justice sector support, with a budget of £ 28 million for the years to come. come. In response to the Ebola outbreak, the United Kingdom has provided nearly 300 million euros of aid to Sierra Leone and sent 750 troops to the country in 2014.

Sierra Leone has been a member of the Economic Community of West African States (ECOWAS) since its establishment in 1975. It also belongs, along with Liberia, Guinea and Côte d’Ivoire, to the Mano River Union (MRU) established in 1973 to promote economic integration. The election of Alpha Conde to the Guinean presidency has helped to strengthen ties between these two countries, despite a territorial dispute over Yenga Hill.