Abridged Resume of the Secretary General of the Mano River Union 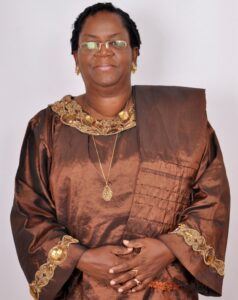 A highly focused individual who works effectively in teams, building socio political networks and dedicated to public service with a career in law and politics, with more than 30 years  work in the cause of humanity generally through contributions toward the enhancement of women’s participation in the socio-economic development of society, politics, law, promotion of women leadership, strengthening of regional cooperation and integration, for peace, security and development the new Secretary General is committed to ensuring effective state collaboration and people’s participation within the MRU framework

Prior to taking up her career in the legal field, Mrs. Medina A. Wesseh worked in the Office of the President as the Director General of the Cabinet and as Executive Assistant to the President of Liberia. Managing Partners of the Internal Law Group and had worked as a communications strategist Specialist during the 2005 and 2011 elections in Liberia.

Development communication, Women in Politics, Gender mainstreaming, organizational management skills have been  the path to a rich International Public Service background as she has worked within the United Nations Economic Commission for Africa, (Ethiopia) USAID Liberia Transition Initiative, (Liberia USAID) the Open Society of West Africa,(Abidjan and Dakar) United Nations Fund for Women/UNHCR (UNIFEM-Sierra Leone) the Consultant Management Enterprise, (Ghana) the United Nations Development Program,(Liberia) Served as a Tokten Consultant her(Transfer of Knowledge through Expatriate Nationals) to the Liberia News Agency where actual career path in journalism begun. Served as Lecturer in communications Studies at both the state and faith based Universities on a pro bono basis since 2004 (schedule and time permitting)

Earlier she left active government service and went on to pursue Legal Studies in 2009 and entered the private sector with the International Law Group.  The firm offers legal services to Government of Liberia and other high profile international clients including the Dangote Group in Liberia.

Aside from pursuing a career in law, there have been other senior executive leadership courses at Harvard and Howard Universities in the United States.  Under graduate and post graduate studies were at the premier University of Ghana at Legon with core discipline in Political science and International Relations, and studies in all aspects of Mass Communications at the graduate level. A Diploma in journalism from the Ghana Institute of Journalism. Workshops, international conferences, seminars in peace building and conflict resolution Gender studies with Akina Mama WA Africa in Entebbe Uganda and Harare Zimbabwe are amongst numerous studies to enrich her career growth.